Our three day trek in the Sierra Juarez mountains was great, but we needed something a little higher, a little more challenging to help us prepare for trekking the great Himalayas.  Toluca de Nevado offered us just that challenge. Towering at 4600 metres, this long dead volcano is now home to two beautiful caldera lakes and absolutely stunning views.

We paired up with Julius and Sandro again and decided to rent a car. We grabbed snacks and fluids and hit the road around 1030am. Major props to Juluis for being the hero and doing the driving to get us out of Mexico city! It took a while, as traffic in this beast of a city is horrific! But finally we made it out, paid a couple of tolls and eventually took the turn off Mexico highway 10, drove past the little town of Raices, past the National Park area (where all the vendors are set up) and began to gruellingly slow switchback ride up the mountain. The reason so many people trek this mountain’s peak is because you can drive almost all the way up! In fact, you used to be able to drive right to the caldera, however the road now stops 2km before and you must hike in. We were in a long line of vehicles cruising to the top and kept passing trucks on their way down with their truck beds overflowing with people – the ‘taxi’ service of the mountain. Finally we reached somewhere close to the top but came to a standstill – there were hundreds of cars parked in a snaking line, which is understandable on a Saturday! This is where we ended up having to park even though it was still quite the distance from the suggested 2km marker. 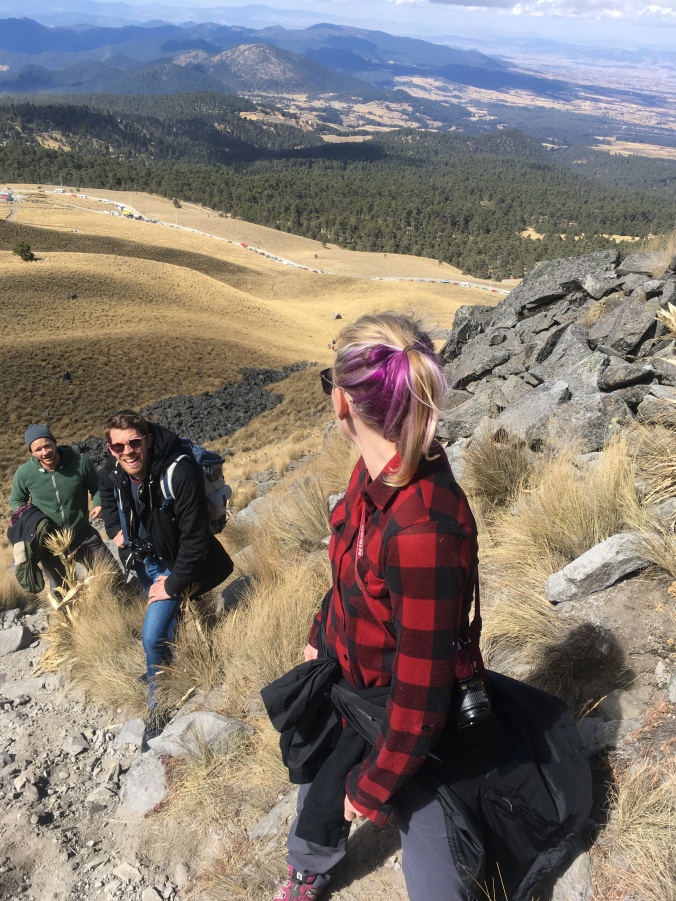 We surveyed the land ahead of us and said why not start out from where we were over land, instead of hiking on a dusty road? It really didn’t look all that bad, Only one real steep part. So off we set, immediately feeling the effects of already being at over 4000 meters. We lost our breath quickly, but found it just as quickly when we stopped to rest, thankfully. We trekked through the tall yellow grass at a steady but slight incline, until we came to the hard part- the incline steepened deeply and rocks littered the way. But we pushed on and huffed and puffed and took a lot of breaks, all in awe of how quickly we were winded. Finally we crested the top and…. our hearts sunk. 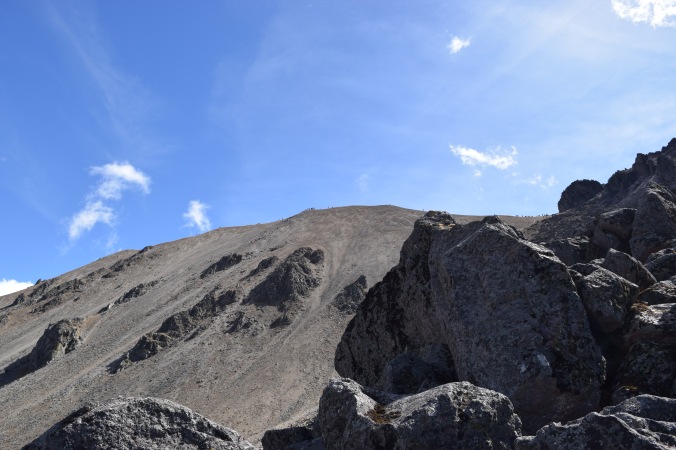 Can you spot the tiny humans on top of the ridge?

We thought we were cresting the top of the old volcano, when in fact we merely crested a small ridge! Ahead of us lay another long stretch of grass before turning into a rockslide of significant boulders. And then – the dramatic last stretch of scree that we would have to scramble up. We had barely even begun! Feeling momentarily defeated, we set out again. So far we had chosen our own path up the mountain entirely and while we saw people taking a path far to our left, the path they were on led them straight up a very steep slope of a couple hundred meters of scree. Scree is a nightmare to climb on especially in such steep conditions, so we opted to continue on our own path and instead picked our way over the huge boulders in the rock slide. This is where the hike really got fun for us! You constantly have to pick and choose your next step with care, and often involve your hands to climb up and over. We even found snow! One teensy tiny little patch! 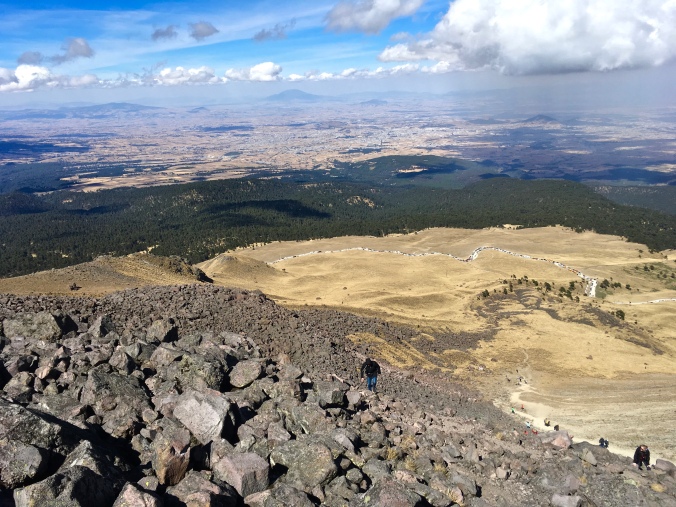 Slowly picking our way over the rockslide

Once the boulders ended, we had to climb the last stretch on scree and it was a nightmare! I can’t believe people were climbing like this from the very bottom! It took everything I had, and many, many stops in those last 15 minutes. But alas. We waited until we were all just below the rim and then climbed up and over together to enjoy the spectacular view as a group, and did it ever take your breath away! Both literally and figuratively – the views were breathtaking, but the wind was also fierce on the ridge and could nearly blow one over, there were mini dirt tornados whipping around everywhere! We walked along the ridge a short while, sat down perched on the edge and brought out our snacks of fruit, nut bars, waters and other treats to share and had a celebratory picnic. It was a hard hike up, due to the steep incline and high altitude and we were now sitting at over 4500m! 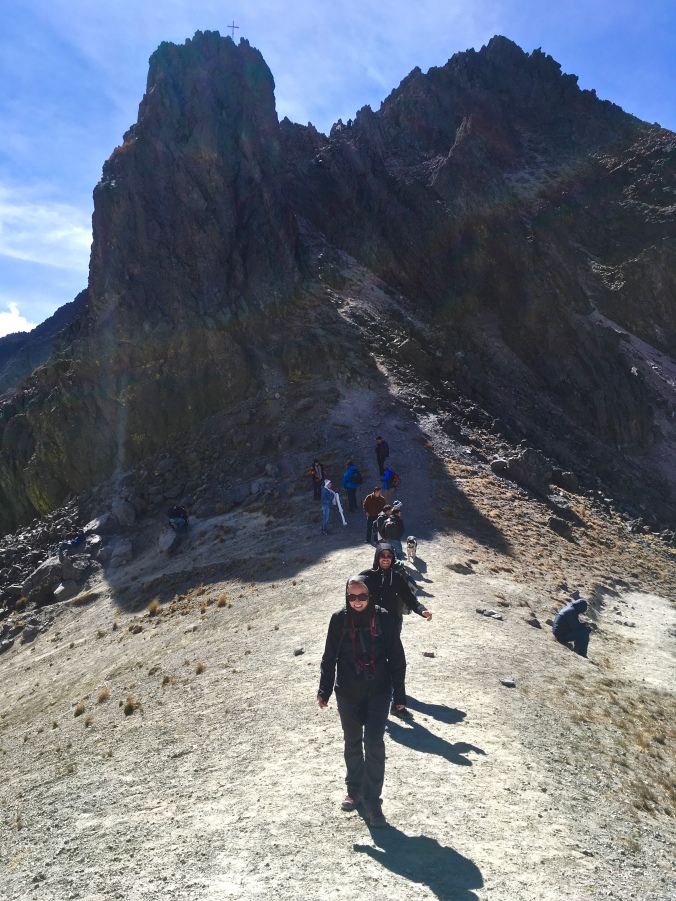 We had absolutely pristine weather. The skies were clear aside from a few clouds off in the distance, and the sun was blazing down on us.  We had unparalleled views of our surroundings. We enjoyed our food while looking all around us in each direction. Behind us the land rolled away in patches of green and yellow, small hills protruded from the otherwise flat ground. And in the distance slightly to the right lay the huge smog cloud of Mexico City. The left was clear skies and air and the right was just this dense, beige cloud of putrid air that clung to the city like a a possessive ex.  On our immediate right lay a narrow dirt path, that same one we sat upon to eat, heading around the old crater. To our left stood the craggy summit of Pico del Aguila at 4640 meters. We saw people attempting to climb it’s scabrous sides, as shale and debris crashed down around them. I absolutely wanted to try climbing it, however, our group was pretty spent and after enjoying the sights and our picnic, we walked along the ridge for a while and then decided to make our descent.  Now while the ascent was challenging, picking your way over huge boulders is not without its fun! However, going down was a whole other world of fun! We decided to descend the way everyone was climbing up – on the scree. You had to be careful, but I experienced racing down sand dunes in Namibia so I figured I could handle this with ease! With a push off, I began running and then lodged one foot into the ground, and got low on my hunches and let the miniature avalanche of dirt and pebbles roll underneath me and take me down. I did this over and over, covering myself in a thick layer of dust, at times crouched so low my bottom was almost touching the ground, my one foot balancing me like a slalom ski. I must have descended half the mountain in less than five minutes! Which is always shocking when you think about how damn long it took you to climb it! 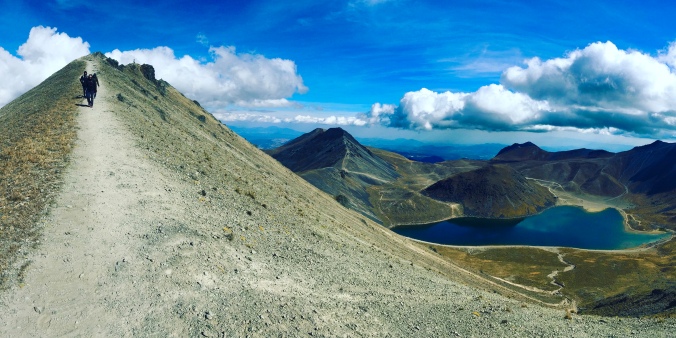 So how does one get to this magical mountain?

You can do this awesome little trek without the use of a rental car- which isn’t cheap might I add- nearly $140 Canadian dollars for one day! They totally screw you over on insurance, which trust me, you want full insurance in Mexico. All you have to do is catch a Flecha Rojo bus from Central del Norte bus station to the town of Toluca. From there, ask around about which bus to get to take you to Toluca de Nevado (it might be called the Raices bus). You’ll get dropped at the base camp where all of the vendors are. Here it’s super easy to catch a ride up – you can hitch up and perhaps others who have their own car will pick you up, or you can just pay a fee to one of the truck ‘taxi’ services, who will pile you into the back of their truck, standing, and haul you up the road along with 20 other people squeezed in like sardines (be sure to wear a bandana to protect your lungs from the dust!). This option will save you a LOT of money. Even split between four people, our car rental was really expensive. So I suggest doing it the cheap way, and really getting an experience out of it! 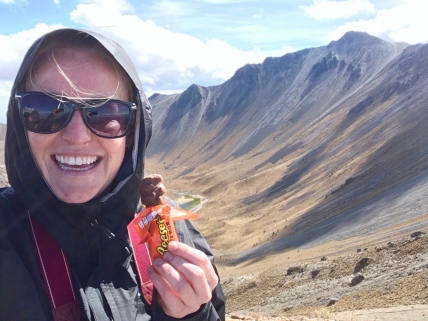 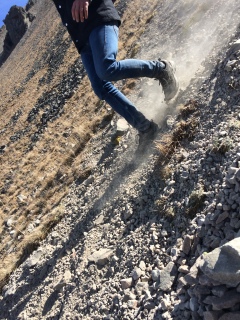 A few things to keep in mind about the trek:

And most of all? ENJOY! This place is absolutely stunning and one of the few places you can climb into an old volcano at such a high altitude without all that much effort! I do recommend taking the extra time to really explore up there – try climbing the two other peaks atop the ridge, walk the entire ridge if you want. Even walk down into the caldera and visit the lakes – but just remember, you’ll have to climb back up! 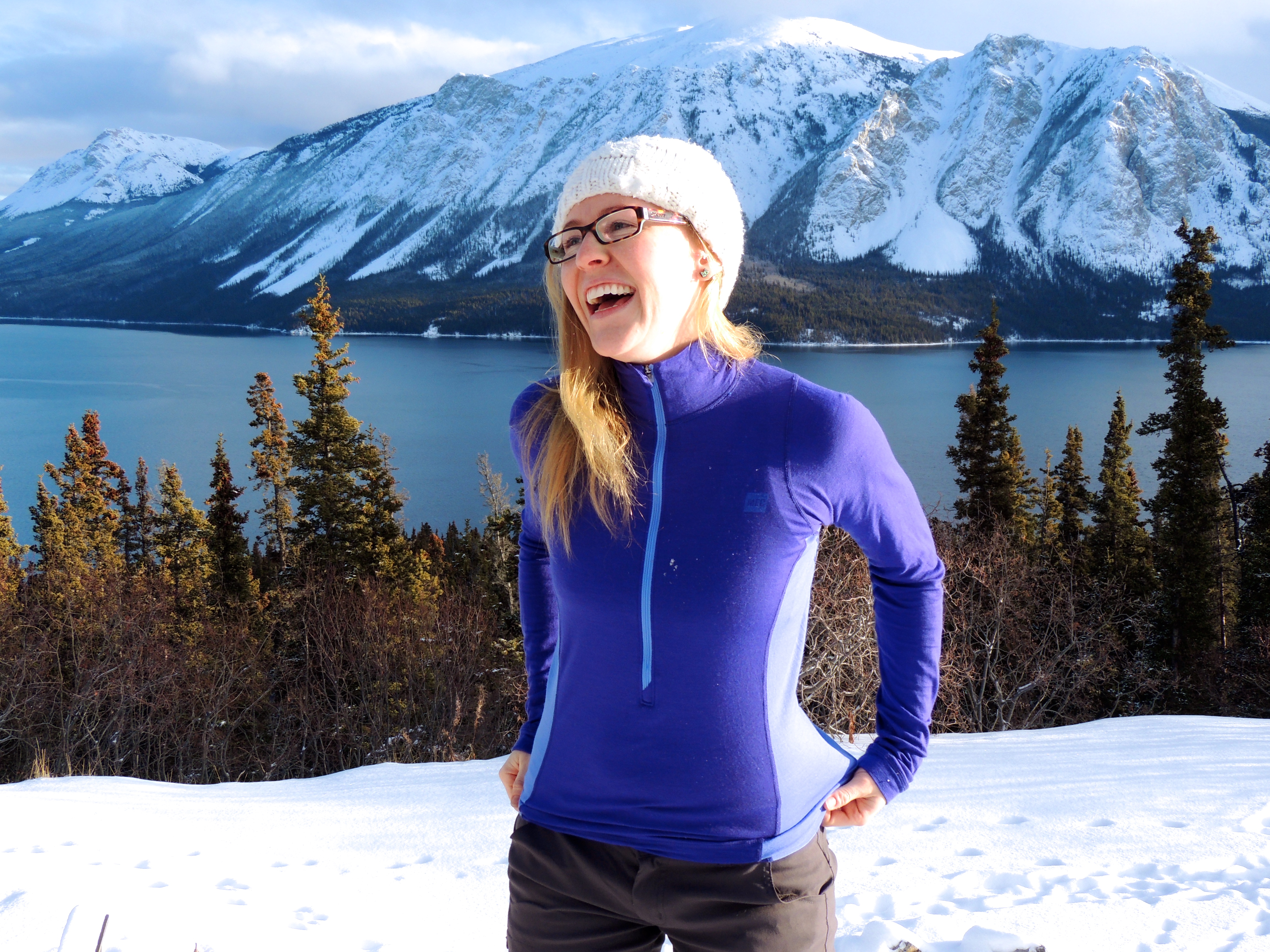